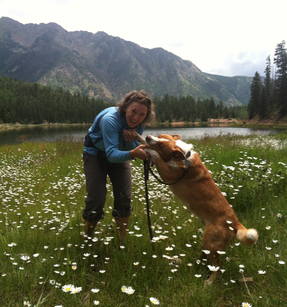 ​Dr. Haldre Rogers
​I am a tropical forest community ecologist and conservation biologist, motivated by a desire to understand and effectively address environmental problems. My research investigates the impact of biodiversity loss on ecosystem services, with a focus on mutualisms and food web dynamics in tropical forest ecosystems.

Dr. Hugo Thierry
Hugo received his PhD in Toulouse, France, studying the spatial
temporal dynamics of the interactions between agricultural practices and
pest population dynamics. He joined the Rogers Lab at the beginning of
2018. His work consists in developing spatially explicit models to study
population dynamics, ecosystem services and conservation biology. In
this project, his goal is develop management scenarios that effectively restore seed dispersal to the island of Guam.

McKayla Spencer
McKayla completed her BS at University of Florida in 2012 and her MSc at Austin Peay State University in 2017 with a focus on viper physiology and behavior. Her interest have historically been in reptile ecology, behavior, and conservation. From 2013-2014 she was a member of the Brown Treesnake Research Team in Guam. She left Guam with a strong interest in pursuing research concerning invasive species impacts on native communities. She is excited to further her knowledge in community ecology with the Rogers Lab. 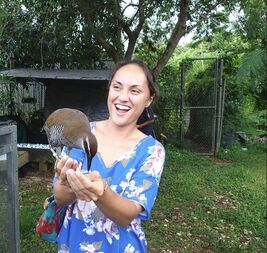 Ann Marie Gawel
​Ann Marie is planning to study novel ecosystems and conservation in the Mariana Islands. Part of her PhD thesis will focus on seed dispersal in non-native vertebrates in a system that has lost its native vertebrates (the island of Guam). She is also addressing social science questions in her thesis focused on how public perceptions and misperceptions affect conservation goals. She has a BA from the University of Chicago and MSc from the University of Guam. She joined the Rogers lab in August 2016 after working for four years as a regulatory biologist for the U.S. Fish and Wildlife Service. Outside of her research, she enjoys hiking and outrigger-canoe-paddling. 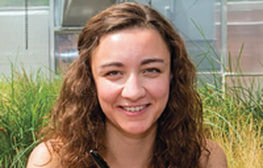 Brittany Cavazos
​Brittany joined the Rogers Lab in August 2016 after receiving a B.S. in Ecology and Evolutionary Biology at Rice University. For her PhD she is interested in conservation biology and community ecology. More specifically, she plans to study mutualistic interactions, functional diversity, and intraspecific trait variation, as well as how these change under environmental stressors. She will begin her dissertation work in the Mariana Islands looking at intraspecific trait variation in plant communities. 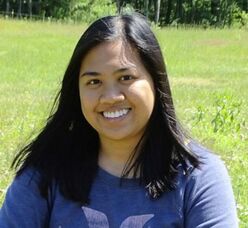 Jerilyn Jean Calaor
Jerilyn joined the Rogers Lab in August 2018 after receiving her B.S. in Biology at the University of Guam. Her interests are in community ecology, conservation biology, and invasion biology. For her PhD, she plans to study food web dynamics in the Mariana Islands, with a focus on insect food webs in the absence of birds as top predators. 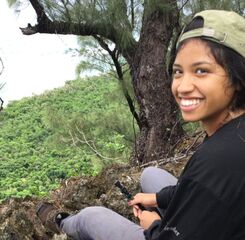 Christiana Quinata
Christiana joined the lab after working for several years as a biologist for the Department of the Navy in Guam. She received her B.S. in Biology from Regis University. Her interests are in ecology, conservation and food web dynamics nuanced by introduced species and habitat modification in the Mariana Islands. The things that excite her in conservation work are applying scientific research through natural resource management and interacting with stakeholders involved. 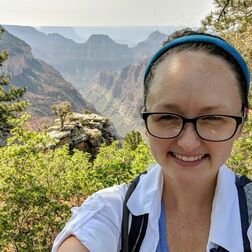 Emily Ernst
Emily is a PhD candidate at Iowa State who started under Kirk Moloney in August 2015 and joined the Rogers lab as a co-advised student in January 2019. Her dissertation focuses on the role of invasive grasses in changing fire regime dynamics in the southwestern United States. She is examining how abiotic factors affect invasion success and plans to analyze the risk of invasion in a spatial context.
Undergraduate Researchers

Ethan
​  Ethan Rose is interested in understanding the spatial relationship between seeds and their dispersers.
​ 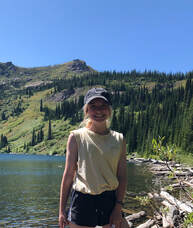 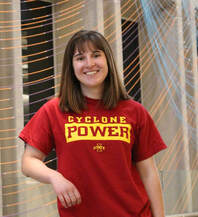 Natalie
​Natalie Dombrowski is majoring in biology with an interest in community ecology and conservation. Outside of her work as an undergrad, Natalie enjoys being outside and listening to live music. ​​​​​ 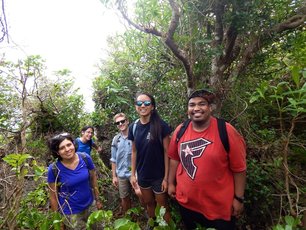